(Joel X. Thomas has been a lifelong musician, performer, and recording artist. He is also a regular contributor to the jonestown report. His other investigative articles in this edition are The Jonestown Express, November 17, 1978: Life on the Eve of Tragedy, The Jonestown Radio Tower (It’s not what you think), and The Infrastructure of Jonestown’s Recording and Speaker Systems: A Photographic Overview. He is also the author of The Most Recent Jonestown Book Cannot Be the Last. His complete collection of articles for this site is here. He can be reached at joelxthomas@hotmail.com.)

(Editor’s notes: The clarity of the two pictures below improves greatly by clicking on the individual images.

The Q042 Death Tape was one of 970 tapes which the FBI recovered in the aftermath of the Jonestown tragedy. It is also one of more than 100 tapes that were recorded in the Jonestown pavilion between mid-summer 1977 and November 18, 1978. Yet it stands alone as the greatest source of confusion, questions and speculation to emerge from that day. A companion article examines the equipment used in making the tape. This article looks at how the tape was actually made, and what mysteries we can unlock. 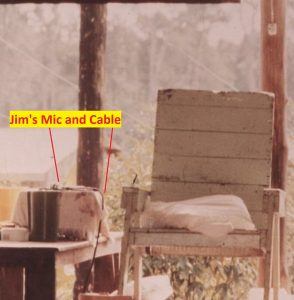 The tape was a reel-to-reel recording, not a standard cassette. The reel-to-reel recorder can be found in archive pictures of the pavilion, sitting on a table to the left of Jones’ chair, and then later laying in the rubble near the table that was overturned likely following the ransacking of the camp. Jones’ microphone can also be seen laying on the table beside his chair.

The reel-to-reel recorder received a direct audio input signal from the pavilion PA system, recording only the audio coming in from the two unidirectional microphones. This means that Jones and another person could speak into their microphones, and have their voices projected through the loudspeakers in the pavilion for everyone to hear, while the entire audio signal was simultaneously recorded onto a completely independent recording source. This was how the Q042 recording was made.

Like many of the tapes recovered by the FBI in the aftermath of the tragedy, Q042 was recorded over a used tape. More specifically, Jonestown survivor Eugene Smith has reported that the hundreds of mixtapes he had made and taken to Jonestown were confiscated by the Jonestown leadership upon his arrival. Many other of Smith’s tapes were used in other Jonestown recordings – the transcripts of Q160, of Q192, of Q170, for example, include music after the news or meetings end; and funk/R&B tapes comprise the majority of music tapes ready to be re-purposed – and Q042 was one of them.

The fact that Q042 was recorded over old tape gives us our point of departure in addressing its first anomaly, that is, the sound of seemingly low and slow droning organ music that lasts the entire tape.

There are two factors contributing to this anomaly, beginning with the tape’s initial recording. Set to its “fast” speed setting, the tape had a maximum running time of 22 minutes, or approximately six songs. The songs which someone – undoubtedly Eugene Smith – had previously recorded were: “I’m Sorry” by the Delfonics; “The Pain Gets a Little Deeper” by Darrow Fletcher; and “Never Give You Up” by Jerry Butler.

Then we have the recorder used on November 18. The tape was loaded onto the reel-to-reel recorder and switched to its “slow” tape speed setting, thus creating a total of 44 minutes recording time.

The second factor is the condition of the recorder used on the final day. On any tape device, incoming tape first passes over an erase head designed to remove any previous signal on the tape. The erase head is activated during record mode and deactivated during playback. The tape then passes over the play/record head, where it either adds signal to the tape (record mode), or reads signal from the tape (play mode). A problem arises, though, if the erase tape head is misaligned. Such misalignment will not fully erase incoming signal, which then ends up in the final recording as a “ghost” or “audio shadow.” This was the case on the recorder used for Q042, as it was on other tapes, such as Q051.

The combination of these two factors – the upbeat funk of a 22-minute tape reduced to a funereal pace over 44 minutes, and a shadow created by a misaligned erase head – gives us the results we would expect: faintly behind all the conversation on the Death Tape, and without competition when all conversation ceases, distantly-heard music plays at half speed.

There is one unanticipated benefit to the partial erasure: The previously-recorded songs play – albeit at half speed – from song to song in their entirety without interruption, thereby debunking any theories that the tape was edited or tampered with after November 18 by unknown but undoubtedly sinister forces. Similarly, it dispels the rumors that Jones himself may have edited the tape as he went along, rewinding and re-recording to remove or re-phrase something he had just said. Had that been the case, the Death Tape would contain the same audio shadow of Jones’ recorded speech in the background. In addition, there would be a volume drop of the previously-recorded music, which would have passed a second time over the erase head. Neither is never found anywhere on the tape.

The second anomaly are the actual tape edits that Jones did make during the recording of Q042. One of two things occur:the recorder was still recording tape when both microphones were turned off; or the recorder itself was paused temporarily.

Since the recorder was completely independent of the actual PA system, the microphones could be shut off to cancel sound going out to the pavilion speakers. When this occurred – such as when someone was close to Jones telling him something for his ears only and he turned the microphone off – tape still spooled through the recorder. Even so, the misaligned erase head still allowed some previously-recorded signal of the half-speed music to bleed through; numerous transcribers of the Death Tape have noted this as “music playing.” Had the erase head been properly aligned, these “microphone off” edits would have resulting in dead silence.

On the other hand, during “Recorder Pause” edits, everything stopped completely: the recording of any conversation at Jonestown, and the playing of the music on the tape itself. The Death Tape contains approximately 80 of these recorder pause edits. But stopping the recorder did not affect the microphones themselves, and Jones could still speak to his followers gathered in the pavilion through its speakers. Overall, it will never be known how long – 10 seconds, 10 minutes, an hour – any of the recorder pause edits lasted, much less what was said during them. What it does mean is that, even though the Death Tape lasts only 44 minutes, it could have been recorded over a period of up to four hours from start to finish.

Since the Death Tape was recorded using unidirectional microphones, very little environmental noise or signal that wasn’t directly spoken straight into the microphone was recorded. This is why a pavilion full of hundreds of people sounded like only 20-30 people were present. When both mics were on and working together, however, the level of noise increased and the crowd seemed larger than when either of the two mics worked individually.

To return to the previous example of Jim Jones talking to Christine Miller: both held microphones and spoke into them. Their voices went through the pavilion PA speakers for everyone to hear, whether or not they were being recorded directly to tape. There were instances when Miller handed the microphone away, but then came back and said a few more words. When that happened, she initially sounded far away, as if she was in the back of the pavilion, then instantly got louder when she held the mic closer to her mouth. At times Jones’ and Miller’s voices overrun each other as they both speak into their own microphones, while everyone around them sounds far away. Again, this is the result of the unidirectional microphones, and it happens multiple times throughout the Death Tape. This is also the reason that very few of the 300 kids who were being poisoned are actually heard crying on the recording. If an open air recorder had been used, more of the surrounding environmental noise would be present.

Finally, people listening closely to the Death Tape have noticed loud thumping noises or suddenly rises and falls of crowd noise. One again, we can attribute this to the unidirectional microphones. The thumping comes from someone clapping as they hold the second microphone; the undulations are due to waving the microphone back and forth, even as Jones’ microphone remains stationary.

There are a few remaining details to account for on the Death Tape, including the radio chatter interference on its beginning and middle sections. The interference was a frequent occurrence on many Jonestown tapes. This was because the recording and audio equipment in the pavilion was located next to the radio room, and interference is a common problem with any sort of audio amplification system, especially when the two systems are in close proximity. And because this radio chatter on those locations occur in real time, we can conclude it was recorded on November 18. Unfortunately, the chatter itself has proven thus far to be impossible to isolate and transcribe.

However, there is also radio chatter at the end of the tape going at half speed. These portions, like the music on the tape, had been recorded prior to November 18, and is therefore irrelevant to the recording of Q042.

Finally, there is backwards music and radio chatter at the end of the recording. Unlike a cassette tape that has two wheel hubs that are permanently connected by a length of tape, reel-to-reel recorders are referred to as “open reel recorders”: Tape is wound around the starting “feed reel,” but not connected to the recorder itself or to the “take-up reel” until it is manually threaded through. The tape starts from the feed reel, travels over the play head of the recorder, and finally starts to collect on the empty take-up reel. The recording ends when the tape unthreads itself from the feed reel. If the recently wound take-up reel is then turned over and used as a feed reel, the resulting playback is now reversed, with the audio going backwards. Once again, this backwards portion of the tape is ultimately irrelevant to the recording of Q042. Like the music throughout the tape, like the radio chatter towards the end of tape, it is going half speed, which means it had been previously recorded using the “Fast” tape speed setting.

On November 18, Jim Jones wanted his voice to be heard one last time. He knew the tape would be found and listened to. It wasn’t for him or his followers, it was for us. It was his final attempt at blaming “an inhumane world” for their revolutionary deaths, a final guilt trip and self-aggrandizement and justification for the deaths occurring before his eyes. Jones made his edits simply to save the limited time that the tape gave him, to allow him to capture only what he wanted to say, what they thought was important for us to hear. In no way does Q042 begin to capture November 18 in its entirety or the horrors of its final hours from beginning to end.