The Jonestown story continues to find resonance for a number of writers, poets, painters, playwrights, and musicians, who offer artistic interpretations of the events through their own individual visions.

* American Messiahs: False Prophets of a Damned Nation, a book by Adam Morris which considers the role that charismatic preachers and religious leaders have played in U.S. history, includes a lengthy section on Jim Jones and Peoples Temple. The book was published in March 2019. An essay from the book – using Peoples Temple and the Jonestown tragedy as a point of departure – appeared in Buzzfeed on March 25, 2019. Reviews of the book include:

* Beautiful Revolutionary, a novel written by Laura Elizabeth Woollett based on the Peoples Temple story – and more specifically, drawn upon the character of Temple leader Carolyn Moore Layton – was released in the United States in May 2019. Several reviews of the book, originally published in Australia in 2018, appeared in the 2018 edition of the jonestown report.

More recent reviews and descriptions of the book include:

Laura Woollett’s own writings about the book include:

In September 2019, the book was shortlisted for the Prime Minister’s Literary Award for fiction.

Laura’s writings for this website may be found here.

* In April 2019, another Australian author, Jo Thornely, published her book Zealot, which focuses on the history of ten destructive cults, beginning with Peoples Temple. The book was reviewed by Erich Mayer of ArtsHub on April 24.

* Undaunted, the memoir of Jackie Speier, the legislative aide to Leo Ryan who herself was severely wounded at the Port Kaituma airstrip during the attack on the congressional party, has been the subject of extensive press coverage since its publication in late 2018. Among the interviews which Speier – now a U.S. Representative from Ryan’s old district – has given are:

Reviews of the book include:

Rep. Speier also discussed her Jonestown experience – and reflected on  the lessons she learned from it – on several other occasions in the past years. Among them:

An excerpt of the book appears here.

* Cult City: Jim Jones, Harvey Milk, and 10 Days That Shook San Francisco, by Daniel Flynn, which was published in October 2018, has been reviewed numerous times since publication of the last edition of the jonestown report. Among the reviews and descriptions:

The book also formed the basis of a column by Calvin Freiburger on Life Site News on the 40th anniversary of the Harvey Milk assassination.

Mr. Flynn also wrote several pieces about his book, including:

The book is the subject of a review essay by Heather Shearer in this year’s edition of the jonestown report.

* Ron Cabral and Judy Bebelaar, the authors of And Then They Were Gone, which was published in 2018, were named San Francisco Library Laureates for 2019 in early February. In making the announcement, the Friends and Foundation of the San Francisco Public Librarywrote: “Our celebration will recognize 35 accomplished writers in the Bay Area and beyond. In addition to specific interest in your book, we look for diversity among authors and genres in selecting Laureate nominees.”

Among the descriptions and reviews which have been published since the last edition of the jonestown report:

Among the interviews of the authors was on May 9, 2019 by KALW Public Radio in San Francisco.

* A 13-minute documentary entitled 605 Adults 304 Children, by Michael Mahaffie, was screened in several film and digital video festivals in 2019, including at Rutgers University in New Jersey and at the Oxford Film Festival in Mississippi, both in February, and at the Omaha Film Festival in March. It won Honorable Mention at the 2019 United States Super 8 Film Festival. The film consists of footage shot in Jonestown. A short trailer appears on Vimeo.

Reviews of the film include:

* In March 2019, the 2006 film, Jonestown: The Life and Death of Peoples Temple, was listed on the MensXP.com website as one of the Top 10 Religious Cult Movies of All Time. That followed the YourTango website ranking of the film as in late January as one of the “16 Best Movies About Cults.”

A talkback session with director Stanley Nelson – along with Jonestown survivor Jim Jones Jr, and others – was recorded on November 28, 2018, ten days after the 40th anniversary. 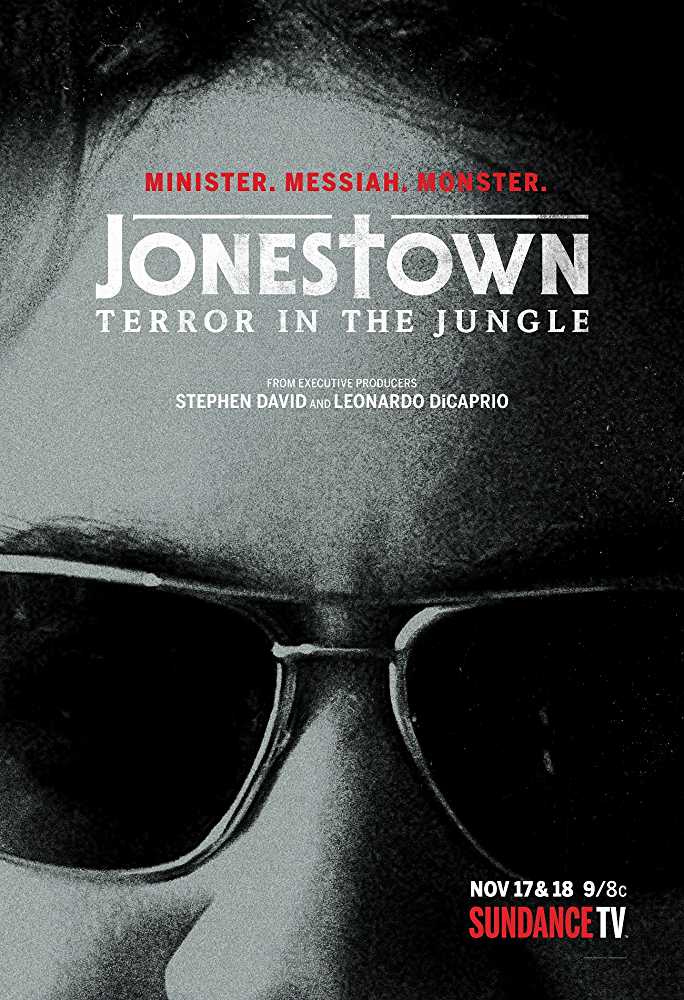 * Jonestown: Terror in the Jungle, was aired on November 17 and 18, 2018 on the Sundance Channel. It was based upon the book The Road to Jonestown, by Jeff Guinn. The trailer appeared on Docnyc.com, entertainment.ie, and Shortlist.

Descriptions and reviews include:

* The third season of Riverdale, a popular American teen drama television series on The CW based on the characters of Archie Comics, opened with the suicide of a character in a manner evoking the deaths in Jonestown: Dilton Dolley has apparently joined a cult and dies by drinking cyanide mixed into a blueberry drink called “Fresh-Aid.”

* Thank You, Dad, a three-act play presented in near-documentary style on the life of Jim Jones and Peoples Temple, had its world premiere at the Baltimore Theater Project in January 2019. Presented by Rapid Lemon Productions, the work included excerpts from documents and tapes from the Temple’s history, including the final tape from Jonestown’s last day. As Jayne Blanchard, a reviewer for DC Theatre Scene concluded, 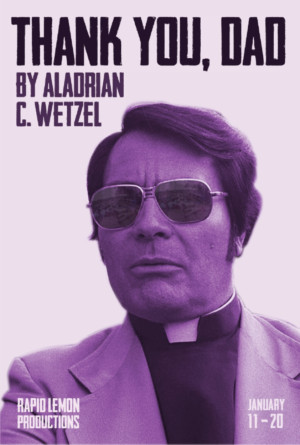 The overlapping voices of the followers wrench your heart as they thank Jones all he did for them, optimistic that a better life is waiting on the other side and, most devastating, that their deaths will mean something.That is what stays with you … Not the ravings of a madman, although [Jones portrayer Lance] Bankerd is hypnotic capturing Jim Jones’ Grand Guignol meglomania. No, you think about the people–idealists, believers in a equal society–reduced to a catchphrase, “drinking the Kool-Aid,” that is synonymous with blind, warped devotion. Never forget.

The play was also reviewed by Patricia Mitchell of DC Metro Theater Arts on January 13, and by Amanda M. Gunther of TheatreBloom.com on January 11.

Michael Kevin Darnell played the part of Jim Jones in this one-man show when it ran in late summer at Kennedy Center for the Performing Arts in Washington, D.C. It was reviewed in The Maryland Theatre Guide and Broadway World (Washington, D.C.).

* The Temple, a drama which evokes numerous images and language from Jonestown, especially its final day, even though the setting is an anteroom of a larger building and furnished with clear plastic chairs, ran at the Malthouse Theatre in Melbourne, Australia in the spring of 2019. A review by Alison Croggon of Witness Performance was published on May 11. 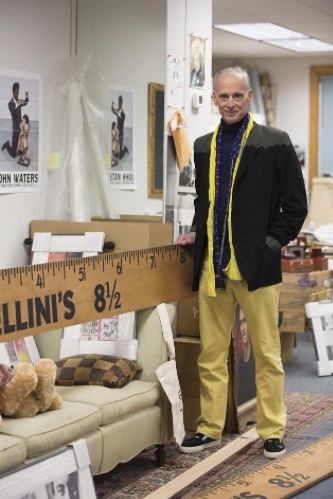 * An art exhibition of 160 works by John Waters which ran through the spring of 2019 at the Wexner Center for the Artsat Ohio State University, included one piece based upon the deaths in Jonestown in 1978. Entitled “Faux Video Room” (2006), the piece consisted of a black curtain covered a solid black wall, but when visitors pulled back the curtain, they heard a recording of the “Death Tape” recorded on Jonestown’s last day. Known for such gender-bending movies as Pink Flamingo and Female Trouble, Waters has had a longtime interest in Peoples Temple, and bought a copy of the recording almost 20 years ago because, as he said, his record collection needed it. 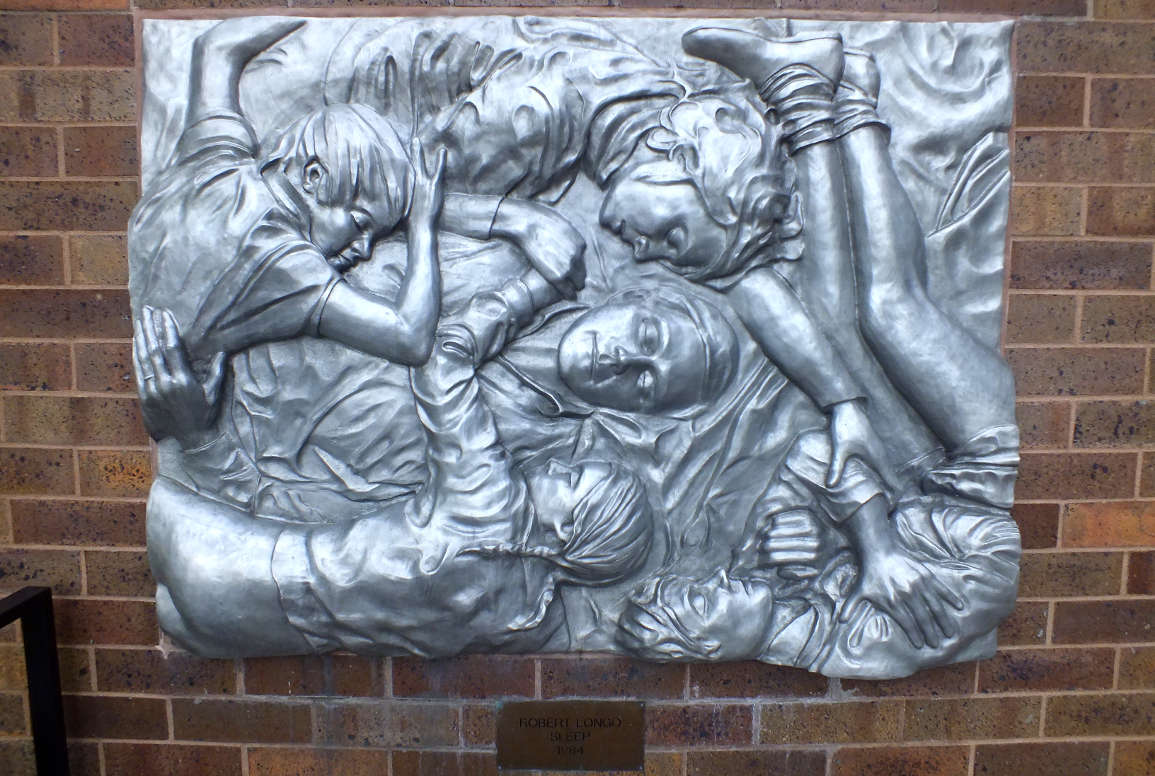 * The Sleep, a sculpture which was inspired in part by the 1978 deaths Jonestownand which has appeared on the federal building in Iowa City, Iowa since 1985, was the subject of a November 16, 2018 article in Little Village Magazine. ““A great deal of my art, particularly the relief The Sleep, is about blowing the whistle on society,” artist Robert Longo said in a contemporary 1985 interview. “I made the piece right after Jonestown.”

* The Peoples Temple album, He’s Able, was revisited in an article in Rolling Stone in November 2018, 45 years after its release. The article includes several musical selections from the album.

* A metal group called The Blanche Davidians released a song Alex Jonestown Massacre, in December 2018 which opens with a portion of an oft-played tape of Jim Jones exhorting his followers in Jonestown to fight with whatever weapons they have. 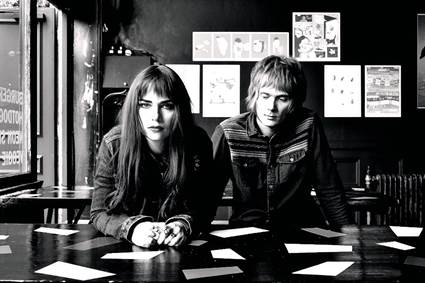 * The British garage rock duo known as the Black Doldrums released the song People’s Temple in late November. It also appears on YouTube.

* In conjunction with the release of their single “Your Addiction” in June, the duo Night Club produced a video which describes the song as conjuring up “a cult of people that have lost their hearts through their addictions. Sort of inspired by Peoples Temple/Heaven’s Gate type cults through the lens of a John Carpenter/Sam Raimi flick.” 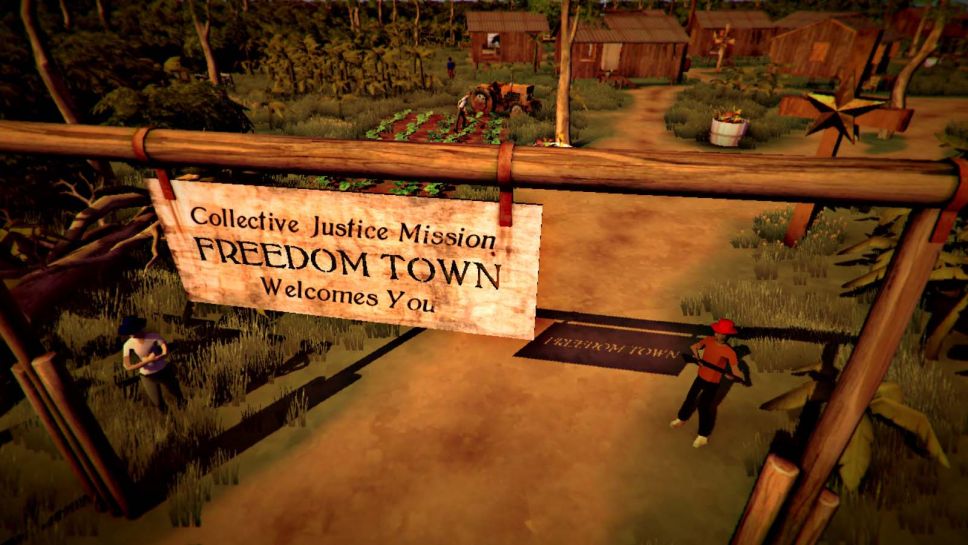 After several years in development, Paranoid Productions released its video game The Church in the Darkness in the summer of 2019. Based upon the events surrounding the Jonestown tragedy, the game puts the player in the role of an investigator who goes to a South American jungle to rescue his nephew, who lives in as mysterious religious cult.

* In conjunction with the two-part television documentary Jonestown: Terror in the Jungle, Sundance Now launched a seven-part podcast which premiered in November 2018 and extended into early 2019. Hosted by Amanda Knox, the episodes represented the first installments of a new true crime series, which included examinations of televangelist Tony Alamo, the Central Park murder of Jennifer Levin in 1986 and vigilante justice in rural America. A listing of the Peoples Temple episodes, which includes interviews with Jonestown survivors Stephan Jones, Jim Jones Jr., Jordan Vilchez, and Laura Johnston Kohl, appears here. Ms. Knox spoke about the series in an interview with Gee Scott and Drew Barth on KIRO Radio on December 13, 2018.