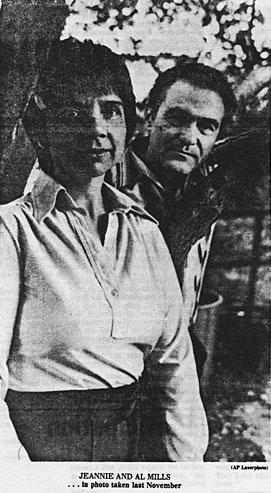 Al and Jeannie Mills – then known as Elmer and Deanna Mertle – joined Peoples Temple in 1969, and eventually rose to positions of responsibility within the church, with Deanna serving as head of the Temple’s publications office and Elmer as the official photographer.

In 1975, the Mills took their family and left the church, and soon became two of its most vocal critics. They founded the Human Freedom Center as a refuge for other Temple defectors and were active in the Concerned Relatives organization which was founded to focus media, political, and government pressure on Jim Jones. Because of their defections and their high-profile campaigns against him, Jones often lashed out at the Mills, calling them traitors and threatening retribution against them.

While they seem to have eventually yielded their leadership role in the campaign against Jim Jones to Tim Stoen – for example, their names do not appear in the April 1978 Accusation of Human Rights Violations Prepared by the Concerned Relatives – their earlier efforts were profound. They were among the first to come forward to speak to Phil Tracy and Marshall Kilduff for “Inside Peoples Temple,” the August 1977 article in New West magazine. They were the source of an allegation that Jonestown was stockpiling illegal weapons, which prompted an investigation by the U.S. Customs Service (The allegation turned out to be false). They were instrumental in hiring Joe Mazor, a private detective who went to Jonestown on at least two occasions in a campaign to retrieve Jonestown residents (although the detective’s actual allegiances eventually became cloudy). They also spoke with Leo Ryan and his aide Jackie Speier in the weeks leading up to the congressman’s trip to Jonestown.

In the immediate aftermath of the deaths in Jonestown, the Human Freedom Center offered itself as the stateside contact for survivors who had no place else to go. Both of the Mills made themselves available for interviews with the FBI, including one on November 29, 1978.

Three members of the Mills family – Al, Jeannie, and their daughter Daphene – were shot in their home in February 1980, more than a year after the deaths in Jonestown. Their murders raised the fear that Temple “hit squads” – ex-members who would supposedly avenge the deaths in the Jonestown community against its perceived enemies – had become active. Those rumors dissipated when the police turned their attention to 17-year-old Eddie Mills, a son who was in the house at the time of the shootings but who was left unharmed.

Other theories about the motive of the killings emerged – it was a drug deal gone bad; there were, in fact, former Temple members involved, but they were looking for Tim Stoen who had lived with the Mills for a short time; and, one conspiracy theory holds, once the FBI agents completed their interviews with the Mills’, as they had two days earlier, they killed the couple rather than let the family’s story leak – but none of them ever found traction.

The initial investigation was eventually shelved, until 2005, when the police re-interviewed several surviving members of the Mills family, asking them to turn over any evidence they may have of Eddie’s involvement. Family members answered police questions, but – since they maintain their belief in Eddie’s innocence – felt  there is no evidence to turn over to officials. The reason for the renewed “cold case” investigation was unknown, since apparently no new evidence was uncovered, nor have advances in forensics technology assisted in reviewing existing evidence.

Nevertheless, on December 3, 2005, Eddie was arrested at the San Francisco airport upon his return to the U.S. for the first time in several years. He spent several days in the Redwood City jail before being transferred to the East Bay. On December 8, the Alameda County District Attorney’s Office declined to file charges, citing a lack of evidence, and Eddie was released. He returned to Japan where he lives with his wife and two children.

News articles about the deaths of the Mills include:

Lowell Streiker, who once worked at the Human Freedom Center, wrote an essay analyzing the center and its founders for the book, The Need for a Second Look at Jonestown (Lewiston, NY: Edwin Mellen Press, 1989).

The possible involvement of Eddie Mills in the murder of his parents is also the subject of a 2020 profile by Jennifer Kathleen Gibbons.