When I started doing research on Jonestown, I felt hesitant about contacting any of the survivors. They had been through so much, and I certainly didn’t want to be identified with reporters who stick microphones in people’s faces and say, “You just suffered a terrible tragedy. How do you feel?” I read a lot of books – Raven by Tim Reiterman, Understanding Jonestown and Peoples Temple by Rebecca Moore, and Seductive Poison by Deborah Layton – all that had personal links to what had happened, rather than the dispassionate or voyeuristic ones.

One of the books I read was Jonestown Survivor: An Insider’s Look by Laura Johnston Kohl. 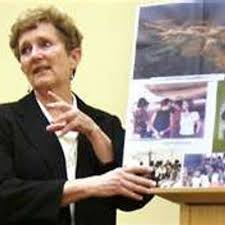 Laura was born an activist, wanting to make the world a better place. She came along at the right time: born in the late 1940s, she was a baby boomer who truly wanted to make a difference. She admired John F. Kennedy, Bobby Kennedy, and Malcolm X. She worked with the Black Panthers on the East Coast, until the siren song of California beckoned to her. There, something else called to her: Peoples Temple. Laura was not religious, but she loved the socialist model of the Temple, how people truly cared for each other. “It was the community I was looking for,” she told the BBC in 2018. “I was looking for equality and justice, and there were people of all backgrounds and races.”

She worked a regular job, then spent her evenings and weekends with the Temple. She attended meetings, worked in Temple offices, and traveled on Temple buses up and down California. Early in her tenure there, she started hearing reports from what was known as the Promised Land, a place free of prejudice. The home movies showed happy peaceful people, proud of what they accomplished. Everything was lush, green, and beautiful. She wanted to go there. She needed to go there. In 1977, she got her wish.

Unlike many Jonestown residents, Laura found fulfillment there, proud of what the residents were accomplishing. But cracks were showing. In the documentary Jonestown: The Life and Death of Peoples Temple, she said that Jim Jones became ill in the summer of 1978 . His constant talking over the loudspeaker was, in her words, “frantic,” and he was losing all sense of reality. This was due to the constant drugs he was taking, along with the high profile defection of Deborah Layton and the claims of a group called Concerned Relatives that something wasn’t right.

In October 1978, Jones sent Laura to the group’s headquarters in Georgetown. The Lamaha Gardens house was a busy place, with a rotating staff of several dozen to secure provisions to send to Jonestown, and with Temple members coming in from the jungle community for medical appointments. Then the Jonestown basketball team arrived to participate in a tournament. Then Congressman Leo Ryan, several members of Concerned Relatives, and a TV news crew showed up, en route to Jonestown for an investigative trip.

Laura was out of the Lamaha Gardens headquarters on November 18th. When she returned, she was shocked to see body bags being carried out. She soon found out what happened. The message had come in on the ham radio that the time had come to commit “revolutionary suicide.”  Jones loyalist Sharon Amos and her children Liane, Christa, and Martin followed the last command from Jonestown. Jones’ son Stephan – who’d been in town as part of the basketball team – convinced others not to do anything until they could figure out a plan.  Reports began to trickle in of deaths in Jonestown, and the toll increased with each passing day. By the end of the week, it was over 900. There were no words.

When Laura returned to the States, she stayed with Peoples Temple survivors. Her biological family didn’t understand, but as Laura told the BBC, “We had gone through this collective trauma together. And it made sense to go through the healing together.”

In the eighties, Laura became involved in Synanon – when I read that, my heart dropped – but her experiences in what she referred to as “my second cult” did help her heal from what happened. She met her husband there, and they adopted their son, Raul. She knew, though, it was time to step outside the residential community and, in her words, “be a grown-up.” She kept in contact with Synanon friends, along with her Peoples Temple friends, but she also became active in the Quaker community in San Diego. She went back to school and became a sixth-grade teacher.  Anyone who has been in sixth grade can attest that teaching kids of that age requires a person to be tough, brave, and kind. Laura was all three.

She was still haunted by Jonestown and its ghosts. “I never believed in Heaven. That’s not how I operated. But in Guyana, I would watch the sunrise and thought it was heaven on Earth,” she said, crying in Jonestown: The Life and Death of Peoples Temple. “And now I can’t believe in Heaven anymore.” She knew it was time to write about it.

In 2010, she published her memoir Jonestown Survivor. Also that year, I met Laura for the first time. She was warm and friendly. I watched her greet her friends with utter joy and happiness.

Laura never refused an interview about Jonestown. She thought it was important that people knew what happened. She also provided a calm presence at Jonestown memorials. One time, someone from a previous memorial behaved in a manner that many felt was inappropriate.  Some people voiced their anger. She calmed them down. “Don’t give them the attention,” she counseled. “They want a fight.”  People calmed down. She was someone whom people respected.

In 2015, when I learned that Berkeley was launching the Bay Area Book Festival, I let Laura know. She decided to go and sell her memoir there. I wanted to see her, but I was moving at the time and couldn’t go. She wrote to me, excited: “I sold out of books!  What should I do?”

“This is fantastic!” I wrote back. “Make vouchers! Get addresses! You’re doing great!” She ended up going back several times.

I knew Laura had been sick. I’d been busy with a new job, working on a memoir proposal, and the comments that Facebook founder Mark Zuckerberg had made led to me spending less time on social media.  I was just checking in one Saturday in November 2019 when I read what Laura’s daughter-in-law Jessica had posted on her wall: There was nothing more that could be done for Laura’s cancer. They were making her comfortable, and hospice was going to take care of her. My heart sank.  People from all different parts of her life posted wishes of goodbye. I just felt incredibly sad. I also thought about how ironic it was the announcement came nine days before the 41st anniversary of the tragedy.

Laura once asked me to give a testimonial for her website. This is I wrote:

In the tragic aftermath of Jonestown, Laura Kohl’s writing and presence are incredibly brave and very true. In a world where the word “Survivor” is thought of as a TV show, Kohl shows us what a “real” survivor looks like.

I meant every word. I still do.

(Jennifer Kathleen Gibbons is a regular contributor to the jonestown report. Her other article in this edition is The Business of Living. Her complete collection of articles is here.)