As has been the case with numerous people and organizations since the COVID pandemic forced a number of activities indoors, the past 18 months has been a time of consolidation of research materials, completion of several projects, and efforts at reorganization of this website. There have been numerous important results.

• Perhaps most significant is a new section on Remembrances that assembled the scores of stories about members of Peoples Temple from across the site and consolidated them into one page. The stories come principally from the biographical boxes from the Jonestown Memorial List, although we also incorporated stories from previous editions of the jonestown report. The section has been added to the left hand menu bar which appears on this and ever page on the site. This research for this page was conducted by Heather Shannon, and we are grateful to her for it.

• Another effort at consolidation was to take the data in the various fields on the Memorial List – for example, the jobs that people had in Jonestown – and presenting them all in a single Excel spreadsheet for use by historians and demographers. The demographic data for those who died 18 November 1978 was created by Marc Pastor, a web design and digital communications specialist at San Diego State. An article by Rebecca Moore which discusses the spreadsheet appears here.

• A page on the Family Trees of Jonestown was added to the site in 2013, in an effort, as the splash page says, “to show the interconnectedness of the people living in Jonestown.” These trees are different from traditional family trees, in that, in most cases, they do not include people who were not part of Peoples Temple. This decision was made in part because we lacked the ability to trace many Jonestown residents through previous generations.

Thanks to the research efforts by Emily Yaden Schneider, we are beginning to provide more detailed family histories, especially of some of the larger Jonestown families. This is an ongoing project, as Ms. Schneider describes in her article about her research and its findings.

• Another effort to consolidate articles on a single subject spread across the site is a new entry on the Jonestown Research page. The Music of Peoples Temple page includes listings for the church services that include both traditional and modified hymns, as well as a catalogue of songs performed in Jonestown. The page also includes articles about He’s Able, the album recorded by the Temple in 1972, about the Jonestown Express performing group, and general articles on Temple music. The final entry on the page leads to a discussion and a pdf of a Peoples Temple songbook, provided by Don Beck, the former director of the children’s choir in Redwood Valley.

• Over the years, a number of websites related to Peoples Temple have come and gone, for a number of reasons (including the deaths of website managers). In an effort to preserve these resources for future researchers, the Alternative Considerations site has a new page for archived websites, with additional entries expected to be added in coming years.

• The page presenting the cables that went back and forth between the State Department on its Embassy in Georgetown – cable which were released under the Freedom of Information Act – has been online for almost two years. More recently, however, we have organized the cables which were released more than 20 years ago to Temple researcher Brian Csuk (who himself ran a long-defunct website on the State Department and Peoples Temple) and incorporated numerous cables in his possession to enhance our own collection. Most of Mr. Csuk’s interest seemed to be the government’s involvement in the Stoen child custody suit, and that interest is reflected in a new page which brings these cables together in one place.

• In part because of the content of these cables, and in part because of the references in these cables to FBI documents released to this site under the Freedom of Information Act, we have transcribed several sections from the FOIA release in their entirety, including those related to private investigator Joe Mazor, John Victor Stoen, and Tim Stoen. A page on the Law Office reports from the Temple itself – including reports on the custody battle – was also transcribed. Many of the transcripts on this last page were prepared by Heather Shannon, and, as with her work on the Remembrance page, we are indebted to her for her assistance. 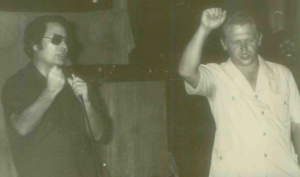 • Work continued this year on further developing the Flickr photo albums, first created by Laura Johnston Kohl. With the help of Don Beck, individuals in many photographs were identified and photo albums were rearranged or added. Others have contacted the site with new information, such as the identification of Foodor Timofeyev, the Russian emissary who visited Jonestown in September–October 1978.

Most exciting are the colorized portraits created by Brazilian photograph Emily Paiva. Divided alphabetically, A–L and M–Z, the portraits humanize those who perished in Jonestown. If you would like to see photos of family members enhanced, please contact Rebecca Moore.

We extended our condolences to Emily on the death of her father due to COVID-19 this year.

Important note for searching for photos: In order to limit your search to the Peoples Temple/Jonestown Gallery, do *not* use the search icon at the top of the page. Instead, select Photostream, and use the magnifying glass/search icon that appears below the name of the site.